With the push to decarbonize the building industry, building codes around the world are being updated to allow for taller mass timber structures, with the state of California now allowing up to 18 stories. But tall timber buildings in high seismic areas come with unique challenges as Prof Pierre Quenneville explains in this article. 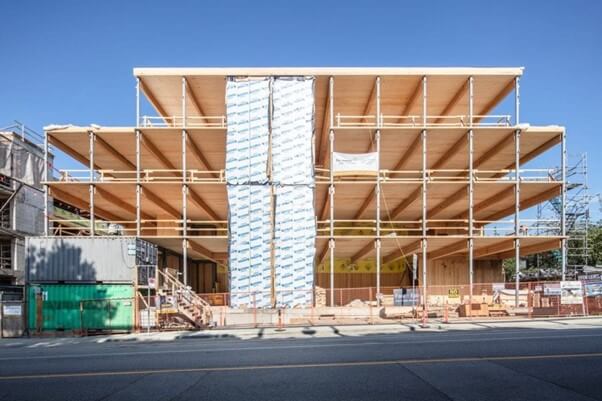 From July 2022, Californian building codes have enabled the wider application of mass timber construction by allowing timber towers to be built up to 18 storys high. Following trends in other states, Canada and Europe, legislators have adopted the 2021 International Building Code standards for mass timber, allowing for both greater height and an increase in permissible square footage of engineered wood construction.

Mass timber buildings play an important role in a building industry that promotes a low-carbon economy and sustainable development. ‘Carbon sequestering is the main driver for using mass timber,’ says Pierre Quenneville, Tectonus co-founder and structural engineer, ‘and enables many countries to use locally sourced materials. The code change in California means corporate clients who want to do their part can now commission high-rises in timber when previously they could use only steel and concrete.’

This trend is reflected in multiple projects across the US, including Walmart’s decision to create the largest mass timber project in the US for their office campus in Arkansas, and to invest $90 million in a new local mass timber construction plant with Canadian timber company StructurLam.

In California, the use of mass timber is growing, says Pierre. ‘There are developers who are looking at multistorey residential buildings using this new law, but there will be a period of ramping up in both the materials supply chain and the industry’s skills capabilities before timber high-rise technology becomes mainstream.’

The benefits and challenges of mass timber construction

Timber construction has a great many benefits. It is a natural, renewable resource whose growth benefits the environment both through carbon storage and because it requires far less carbon in its manufacture than concrete or steel. Additionally, the use of timber in buildings provides both visual appeal and has a positive effect on mental health, leading to its generous application in salutogenic and biophilic design.

Gaining their strength from cross layering, wooden structural elements can be considerably lighter than their steel or concrete equivalents, which reduces both transportation costs and the size and cost of foundations due to reduced gravity load.

‘Timber’s strength-to-mass ratio is higher than concrete, so for a given floor plan, a timber floor weighs far less than a concrete floor,’ says Pierre. ‘For high seismic areas like California, this is a huge benefit. Any reduction in concrete in a building will reduce the earthquake demands.’ Its lower weight also speeds up construction time.

To date, timber multistorey engineers have been switching to timber for the gravity systems, but still use steel and concrete for lateral load-resisting systems. The main challenge for a core made of mass timber is that the typical timber shear wall is more flexible than concrete or steel, creating limitations on how much a building can sway in the event of an earthquake before it makes people inside feel uneasy.

‘While the industry is investigating higher density timber species for these applications, current flexibility in mass timber shear walls means 100% structural timber buildings are being designed in the range 6 to 10 stories, whereas their hybrid counterparts can go to 18 stories and more. Timber bracing bays are a stiffer overall system than timber shear walls (for the same quantity of material), offering the potential to create a higher number of floors meeting code requirements. The industry is still working through all these pros and cons.’

Whether timber multistorey buildings are designed using 100% mass timber or a hybrid of timber, steel and concrete, the type of seismic connections play a role in the resilience of the structure and other building elements, both during an earthquake and through the following aftershocks.

As designers of seismic protection technology, we have developed ‘no-damage’ devices that settle back into position following a shock. Designed with geometrically nonlinear behavior, Tectonus connectors reduce earthquake loads on buildings. A shear wall or bracing wall can move during a quake, but the seismic connections self-level following the initial earthquake, ready to resist the aftershocks. 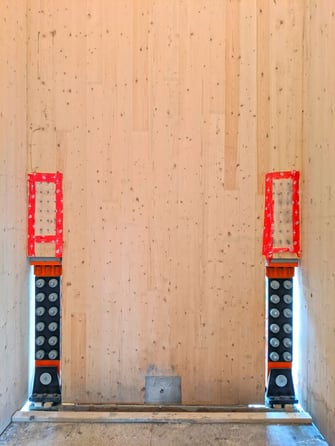 ‘In the past, structural solutions for nonlinear behavior have been taken by the material itself,’ says Pierre. ‘This means the material—steel reinforced concrete or steel bracing—has to change, and after a number of cycles it breaks or needs replacing.’

Tectonus connectors are designed using profiled steel plates and conical springs. As a mechanical device, they can flex, dampen the earthquake energy through friction, then self-settle; that is, the device provides nonlinear movement and then returns to its original position. This is due to the mechanical design itself and not the physical characteristics of the material changing.

Says Pierre, ‘This is why the device is so resilient and ready for aftershocks. It absorbs tension and compression from the initial quake yet remains fully functional to take subsequent shocks.’ Inherently, the structure of the building is not changed, and damage to the building is mostly cosmetic.’

The main causes of business disruption after an earthquake are due to structural damage, leading to a compromised building envelope and/or damage to building systems, such as electrical, mechanical and fire systems. Protected by Tectonus devices, the building structure remains intact and resilient, better protecting people as well as the envelope and systems within the building.

Designed with the architectural team at DIALOG, the timber-braced frame and cross-laminated timber shear wall systems were tested at the University of Alberta and the University of Queens, ‘providing valuable engineering information back to the design community for future tall wood projects.’ 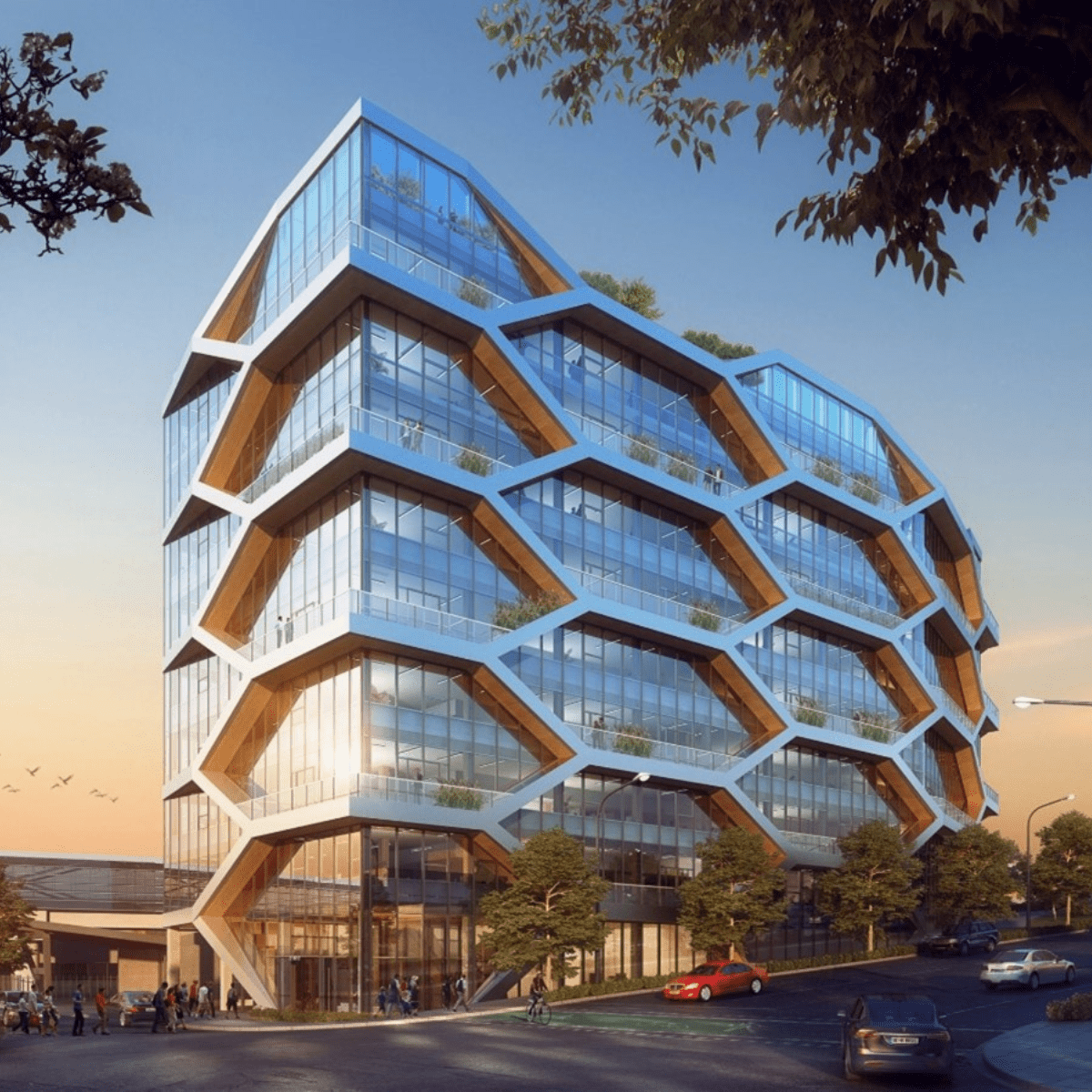 The expressed perimeter timber-braced frames are paired with four discrete internal cross-laminated timber (CLT) shear walls, eliminating the need for conventional cast-in-place concrete cores. The engineers at Fast + Epp specified Tectonus seismic devises for supplementary energy dissipation at each of the braced frame members and within the CLT shear walls. The seismic connector solution at 2150 Keith Drive is a key project for studying Tectonus technology in mass timber and will be closely watched by the industry.

As places such as California gear up for more client interest in mass timber high-rise buildings, they will need the consultant teams, contractors and materials suppliers to scale efficiently and quickly. In addition to the Wood Products Council, which is a great source of information, the annual International Mass Timber Conference in Portland is the go-to event for all things mass timber.

Other useful resources include:

Speak with a Tectonus engineer about the use of resilient Tectonus seismic connections in mass timber buildings. We can provide engineering support from concept to peer review.

Which structural device is best to reduce seismic demand? We often get asked how the Tectonus self-centering seismic damper ...
Start Reading