Which structural device is best to reduce seismic demand?

We often get asked how the Tectonus self-centering seismic damper (RSFJ) compares to a Buckling Restraint Brace (BRB) so thought we’d write this up into an article in which we try to be as objective as possible.

Before getting into the unique market factors, performance abilities, and quality of these seismic protection devices, let’s start with the basics.

What is a BRB?

A BRB is a structural brace intended to yield when exposed to extreme forces such as an earthquake. They consist of a steel core encased in concrete. The thin steel plate can elongate and provides significant ductility in tension. Under compression loads, because it is thin, it will buckle and has no resistance. Therefore, the concrete casing provides this buckling restraint. 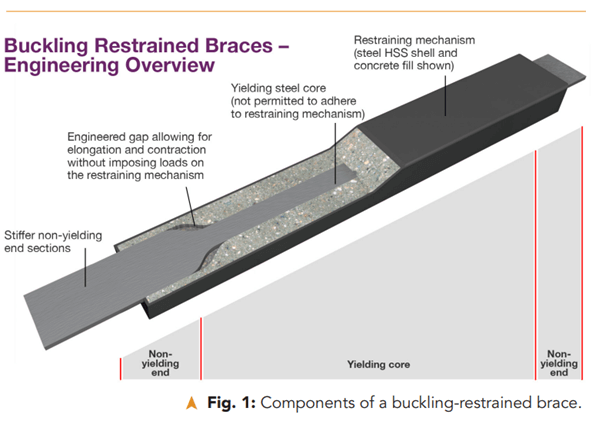 Originally developed in Japan, the technology is widely available through North America, Italy, New Zealand and other earthquake prone regions.

Tectonus developed the self centering seismic damper which is intended to dampen the force of an earthquake and then, fully self-centre itself. It is composed of ridged steel plates connected by steel rods and conical washers. The ridged plates clamped together provide the friction in tension or compression, and the conical washers effectively act as springs allowing the device to return to its original shape once the load comes off.

The technology is now widely used in New Zealand with initial projects delivered in Canada and in development in Japan and the USA.

BRBs are well known and manufactured by several different providers. Because they have been around so long, many engineers know how to design with them. In addition to this, they’re relatively inexpensive and have been adopted into codes in e.g. the USA. Tectonus RSFJ being a proprietary technology, and new to market, is much earlier in the adoption cycle.

Tectonus RSFJ is unique amongst seismic devices for its ability to fully self-centre. Though it has less raw damping capacity, the Tectonus RSFJ affords other advantages to the structural designer such as a lower overstrength factor. Notably, the RSFJ deals with both earthquakes and aftershocks the same without any reduction in performance. To what extent the extra damping provided by a BRB to structures is actually useful, is still under research.

Both BRBs and Tectonus RSFJs are set and forget until an earthquake, at which point a BRB will most likely need to be replaced. An RSFJ on the other hand can be used repeatedly.

Knowing that the seismic device employed performs to specification is essential for structural designers. Uniquely, the Tectonus RSFJ can be fully performance tested to the design level earthquake. Meaning every unit is tested prior to shipping and comes with a testing certificate. Consequently, BRB’s cannot be fully production tested as they are designed to yield.

The RSFJ is inherently flexible as is the BRB. However there are some common differences. 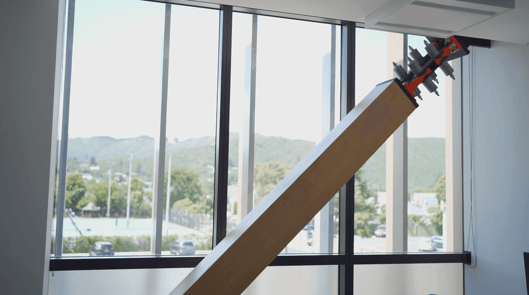 RSFJ in a timber brace in the Hutt Valley Health Hub.

The BRB is the stalwart of structural design in seismic areas. It is relatively cost effective, easy to design with, has high damping ability and can scale to accommodate large loads. That’s why for many structural engineering applications it’s the seismic device of choice.

Tectonus RSFJ is the new kid on the block. As adoption grows and volumes increase the technology cost will come down and it will get easier to design with it. It offers the structural designer a lot of flexibility across several applications. In a real earthquake its performance through main shocks and aftershocks is hard to beat.

Given the unique performance of the system, the RSFJ can be used as the single lateral load resisting system while the BRB is often used in parallel with another system (such as steel MRF or viscous dampers) to enhance the performance. The relatively higher over-strength factor of the BRB (as a result of unpredictable performance and difference in tension and compression performance) can be a limiting factor especially in retrofit schemes. Post-slip stiffness of the RSFJ is adjustable while there is no post-yield stiffness for BRBs.

As you can see, there are advantages to both seismic devices when it comes to earthquake protection. If you’d like to learn more about how a Tectonus RSFJ seismic damper could benefit your building project, download our product brochure or get in touch.

Tall mass timber buildings in California offer opportunities and new design challenges  With the push to decarbonize the ...
Start Reading